Factors influencing pollutant concentrations and their effects at the physiological level

Many environmental characteristics mean that in the polar regions, pollutants are deposited faster than they are degraded. Local wildlife is thus exposed to high levels of pollutants, and it becomes important to be able to assess the effects of this exposure.
During my thesis (2011-2014), carried out at the CEBC under the supervision of Olivier Chastel, I studied the impact of contaminants (persistent organic pollutants – POPs and mercury) on the stress physiology of two polar seabird species (black-legged kittiwake and snow petrel). I was able to show that PCBs, POPs that have been banned for 30 years, disrupt the stress response of seagulls and petrels. I also showed that birds heavily polluted with mercury tended not to breed, and among those that did, looked after their chicks less well than either species.
During my first post-doctoral contract at the Norwegian Polar Institute (2015-2018) in Tromsø, I studied the combined effects of pollutants (POPs, PFASs) on the energy metabolism of polar bears, as well as the factors influencing POP levels in blue whales and fin whales.
More recently (2019-2020), again at the CEBC, I have been studying the temporal variations of mercury concentrations over 17 years in black-legged kittiwakes, taking into account different environmental factors. The extent of the sea ice is the main predictor of mercury concentrations in gulls in Svalbard. All these results raise questions about the potential synergistic effects of global changes and pollution on the health of certain animal populations.
I will soon begin a new post-doctoral research project under the direction of François Brischoux and Frédéric Angelier, which will aim to understand, depending on the environmental pressure (preserved or polluted environment), the effects of low doses of a glyphosate metabolite on the metabolism of juvenile Spiny Toad (Bufo spinosus). 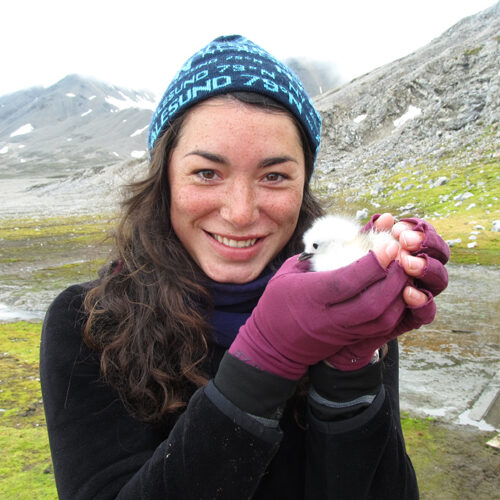