The “Bio-logging, Analysis and Data Modelling” service (SBAM) is a joint service of the laboratory. It provides research support in the field of bio-logging, analyses and statistics for the three teams of the laboratory, particularly in the spatial domain (trajectory of animals tracked by GPS beacon, analysis of habitat selection, behavioural monitoring by bio-logging…). He contributes directly to the research programs and provides supervision of students, teaching and training. Contact : David Pinaud Akiko Kato 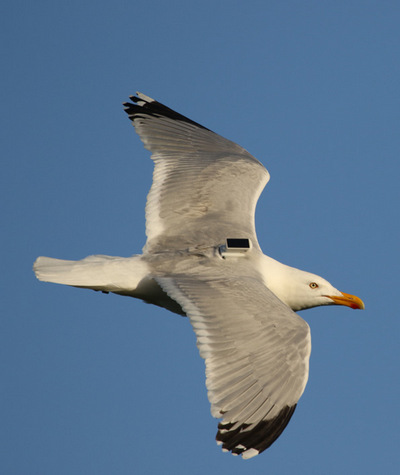 Bio-logging at the crossroads of disciplines

Since the early 1980s the CEBC has been using an automatic VHF telemetry system to track large mammals in the Chizé forest. In 1989 the CEBC pioneered the use of satellite telemetry systems, tracking albatrosses with miniaturized Argos beacons, and then the use of geolocation systems (GLS) and miniaturized GPS. Today, biologging not only allows the remote monitoring of increasingly small animals, but also to study their behaviour or physiology. Thanks, for example, to accelerometry, which can measure movements in all three spatial axes at a frequency of up to 60 measurements per second, it is now possible to reconstruct the three-dimensional movement of birds, mammals or reptiles. The addition of miniaturised sensors makes it possible, for example, to measure pressure, and thus estimate the depth to which a snake, penguin or seal dives, or the altitude to which a bird ascends during its migration. Biologging is used for conservation programmes to determine, for example, feeding or resting areas for species threatened by agricultural practices or fisheries. Finally, intelligent, miniaturised devices now make it possible to measure the oceanographic parameters in which the animals evolve, and to record or send them by live satellite, transforming these animals into oceanographic aids for monitoring the evolution of oceans affected by climate change. 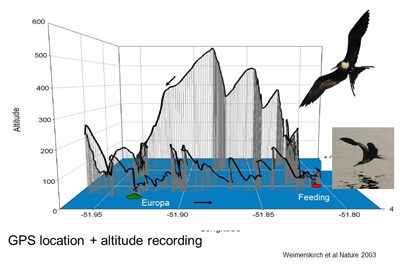 3D trajectory of a frigate in flight between the island of Europa (in green), west of Madagascar, and its feeding site (in red). This marine predator is able to remain in flight for several weeks without touching the ocean surface. 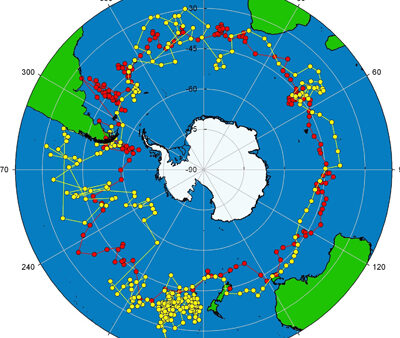 Circumpolar migratory movement of a large albatross equipped in the Crozet Islands with a GLS light recorder. During the sabbatical year the great albatross makes a double round-the-world trip of more than 100,000 km. 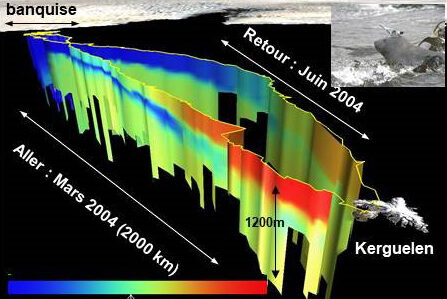 Temperature profiles recorded by elephant seals equipped with high-performance beacons, starting from Kerguelen and diving continuously to Antarctica during their annual migrations.