The Southern Ocean plays a fundamental role in regulating the climate of our planet. This ocean is home to an ecosystem that is likely to be very vulnerable to global warming, as many species of phytoplankton and zooplankton are highly dependent on the Antarctic ice sheet. SNO-MEMO covers the Indian sector of the Southern Ocean. With our foreign partners, an almost synoptic coverage of the Southern Ocean is ensured. 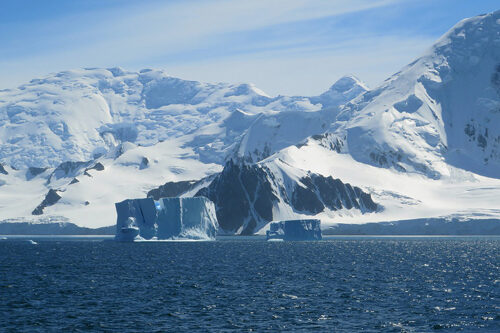 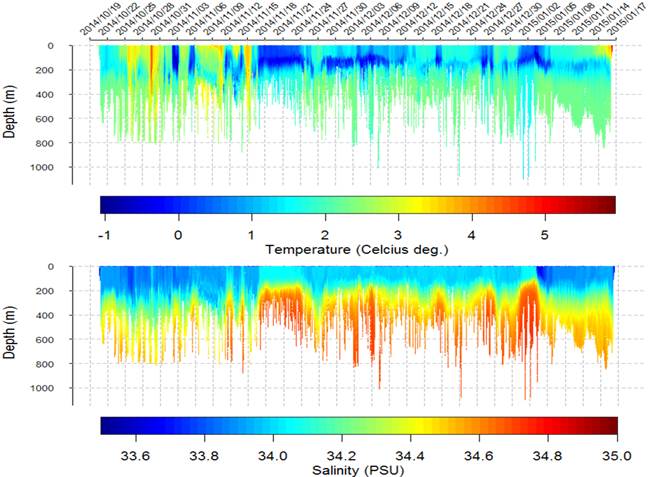 How to record observations in the polar oceans

The means available to observe this ocean in order to detect oceanographic and ecological changes affecting it remain limited. The standard oceanographic data for studying ocean circulation and the amount of heat stored in the Southern Ocean are vertical profiles of temperature and salinity. Modeling efforts are constrained by a lack of in-situ data. Indeed Argo profilers are carried from west to east by the powerful circum-Antarctic current and are ineffective for sampling the pack ice zone, as they cannot then rise to the surface because they risk being caught and crushed by the ice. Few oceanographic vessels are present in Antarctica, especially during the winter period. Moreover, these means are very expensive to implement. To make up for this lack of data, the idea was to take advantage of the work carried out on the ecology of Antarctic seals to collect oceanographic and ecological data and to complete and strengthen the observation system for this ocean.

In this context, the collection of hydrographic profiles from CTD and fluorescence sensors attached to marine mammals is very advantageous. A judicious choice of the species, sex and age of individuals makes it possible to obtain data in under-sampled regions such as areas of pack ice or continental shelves. Among marine mammals, elephant seals are of particular interest for this observation mission because they are capable of diving continuously at great depths (590 ± 200 m, and up to 2000 m) over long periods of time (for 25 ± 15 min on average and up to 80 min). Thus females preferentially feed in the ocean environment between the sub-Antarctic front and the pack ice zone, while males preferentially feed on the Kerguelen Plateau or the peri-Antarctic plateau. Weddell seals equipped with equipment make it possible to target more particularly the Antarctic pack ice zone, which is also visited by some elephant seals. These animals are faithful to their birth site where they return to reproduce and renew their fur (moult). It is then possible to capture them and retrieve the beacons and the high-resolution data they contain. 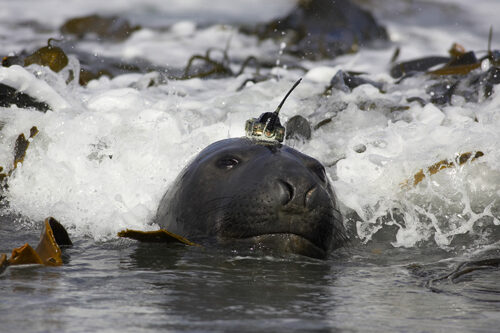 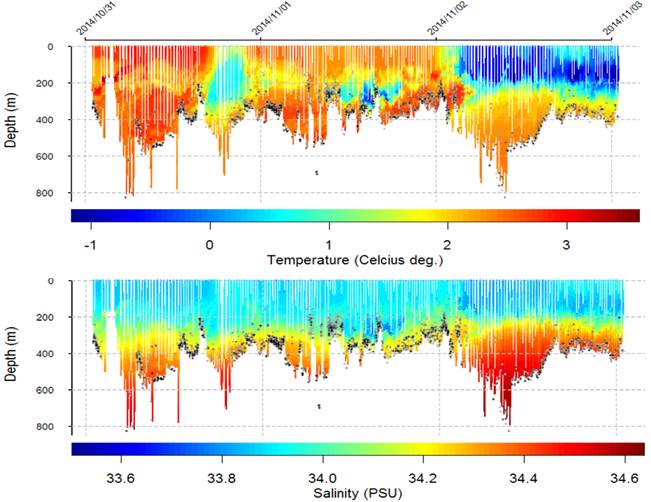 At the same time, ecological data are also collected: sea trips, diving behaviour (e.g. the prey capture attempts shown opposite), but also the evaluation of the body condition, effort and fishing success of these animals according to the local oceanographic context. An important added value of SNO-MEMO is that it not only answers questions relating to physical, biogeochemical and ecological oceanography, but also makes it possible to address scientific questions at the interface of these disciplinary fields, such as determining the influence of local oceanographic conditions on the structuring of biological resource fields.

An essential source of data for the Southern Ocean

Although less accurate (minimum guaranteed accuracy: 0.02°C and 0.05 PSU) than those obtained by ARGO autonomous profilers or from oceanographic vessels, the temperature and salinity profiles delivered by elephant seals and Weddell seals are now the main source of oceanographic data available for the southern part of the Southern Ocean. Thus, 80% of the oceanographic profiles available south of 60°S and 98% of the data associated with the pack ice zone were sampled by austal seals. In addition, data on chlorophyll concentrations derived from fluorescence measurements were also obtained. 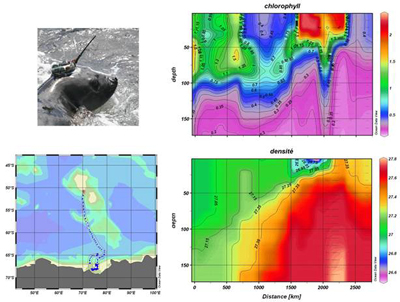 Female elephant seal equipped with a CTD-Fluorescence beacon and having travelled between Kerguelen and the Antarctic zone -(bottom left). Chlorophyll_a concentration (g.m-1) estimated from fluorescence measurements (top left) and density measurement in the first 160 meters of the water column calculated from T/S measurements obtained simultaneously. Note the sudden disappearance of phytoplankton in the water column, which corresponds to the formation of pack ice revealed by changes in density.beacon

Towards an integrated and interdisciplinary approach to oceanography and marine biology

Over the years we have supplemented physical oceanographic measurements with a whole new series of biological measurements such as, for example, the concentration of phytoplankton in the illuminated layer of the ocean. However, until very recently, we were sorely lacking information on the intermediate trophic levels, i.e. the whole zooplankton and the small fish and squid connecting phytoplankton to elephant seals. Accelerometers provide information on the number of head movements associated with attempts to capture prey during the dive and thus on the abundance and distribution of prey in the water column [1]. These attempts are indicated by the black dots in the figure below (left side). These dots are superimposed on the temperature measured by elephant seals. Considerable progress has been made thanks to the design and realisation of a miniature sonar by Mark Johnson and Pauline Goulet [2] in connection with the elephant seal programme. This micro-sonar can detect zooplankton, fish and squid larger than 1 mm and estimate their abundance. These organisms can be differentiated by their acoustic size and behaviour. In the graph (in the middle) we can see organisms, some of which come close to the surface at night while others remain at the same depth whatever the time of day (Thesis M. Tournier CEBC). Bioluminescence [3] is another parameter that tells us about these intermediate trophic levels (right). Today, the greatest added value of SNO-MEMO is to allow us to evaluate the influence of these physical conditions (temperature, salinity, light) on the distribution, abundance and behaviour of these intermediate levels can be studied because they are difficult to observe even though they represent the largest daily biomass migration on earth. We were far from imagining the day we equipped the first elephant seal with an oceanographic beacon, that 15 years later they would provide us with so much information on the biology and food webs of the Southern Ocean. 1] Guinet et al (2014) MEPS [2] Goulet et al (2019) Deep Sea Research [3] Goulet et al (2020) J Exp Biol 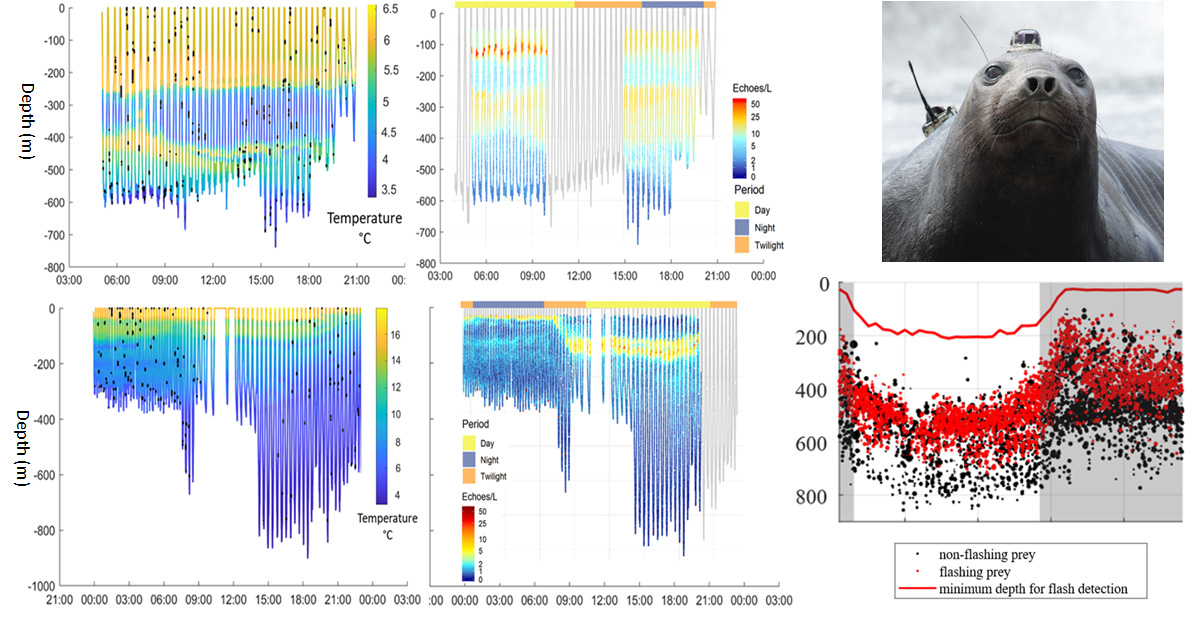